Been meaning to write something about last weekend but, as ever when something demands more than a couple of paragraphs, I’ve been putting it off. And with my current workload, I can’t see it getting back on, so here’s the (hopefully) condensed version…

Friday night: Gill and I went to the private view of the Martin Sastre exhibition at the Site Gallery – brilliant, funny. But is it art? I’m not bothered. Cryogenically stored Walt Sastre awakes in the future and guides us through the death of video art, via Hollywood and Matthew Barney. The artist masturbates kittens waiting to die. And where else would a video artist come from but… Montevideo, of course. I wanted to corner the artist, but only spotted him outside as we left. Gave him a knowing smile, which probably scared him enough.

Straight after that, we went to see the new Michel Gondry/Charlie Kaufman movie, Eternal Sunshine of the Spotless Mind. It was good, although not quite as good as I’d hoped, call it a 4/5. I certainly don’t agree with Peter Bradshaw’s review in the Guardian, that it’s filled with uneccessary visual tricks and gimmickry, but I do think that there’s something lacking at the heart of the story. Very enjoyable all the same. Especially after a few free glasses of wine at the private view.

Saturday morning, pack everything up and ship the kids down to London. Rowan, Lola and I took the adventurous option – by train, diverting via Deptford. Gill stayed at home to decorate. 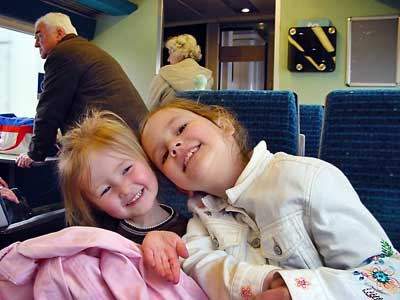 Train from Sheffield to St Pancras, walk down the road via a couple of accidents with Lola (ouch! Tears!), caught a bus to Monument (because Lola “didn’t want to go on an underground train”), showed Rowan the monument of the Fire of London, which she’d recently learnt about at school, decided not to walk to the top (hard enough to walk on the level with two kids, a suitcase & assorted other baggage), caught the Docklands Light Railway to Deptford, visited Therese at the Temporary Contemporary Art Flea Market, Rowan bought Gill a mask, I bought her an old copy of Raw Vision, the kids got some toys, but we didn’t come away with anything that felt much like art (I wish Gill were with us, I always feel happier making purchasing decisions with her stamp of approval), caught a train to London Bridge and another to Waterloo East, popped into some place called Auberge for our dinner, looked from the menu like it served some quite decent food, but it turned out to be a rather low-to-middling gastropub, got the train from Waterloo to Teddington and finally to my parents’ house.

Once the kids were in bed I popped down to the Teddington Arms (new pub that’s sprung up where the Italian Place used to be – actually pretty decent, nice range of beer) and met up with Catherine and Lisa, first time I’d seen them since Hannah’s wedding three years ago, and Derrick (now an item with Catherine) who I hadn’t seen in about 15 years. Derrick was on top form, great seeing him again after all this time (I think he must’ve been about 16 last time we met).

Sunday morning we went to Bushy Park, met Jenny (also first time in far too long) and her chap (Carl?) and their daughter Anya, who’s a few months older than Lola. The two of them, and Lily (who’s one) had a great time playing in the Woodland Gardens. Lovely to see Lola interact with other kids her own age. 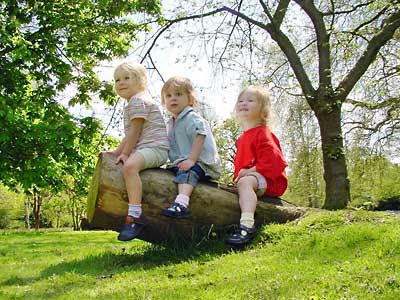 Sunday afternoon was Dad’s 60th birthday party. Lots more reunions. Last time I saw a lot of these people was at Dad’s 50th – funny, there’s a definitely post-retirement change to most of them; almost, dare I say it, a sense that they’re running the last lap of my lives. Slightly sad, but still the day was mostly happiness and interesting conversation. Really nice to see my cousin Rebecca, her partner Steve and son Luih again. Great chatting to them and it made me realise we really ought to meet up more. Luih is now six, and despite having that exuberant accidental destructiveness common to all young boys, he’s so much nicer than other examples I’ve met recently, much more the type of boy I remember (mistakenly?) myself being. We watched tadpoles in the garden pond and hunted newts – as soon as I got my hand within six inches of a newt, it darted instantly to the other side of the pond. I told Luih "you’ll never manage to catch a newt in your hand". Less than three seconds later, he had one wriggling in his palm. Rebecca said it’s his Balinese fishing genes. Five minutes after that, he was up the other end of the garden, holding aloft a toad which he’d dislodged from the boulders around the fountain. 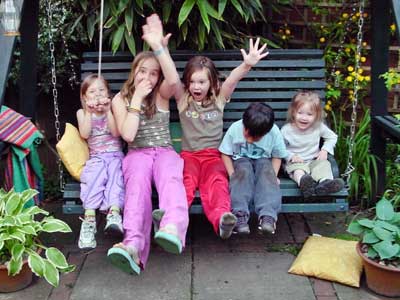 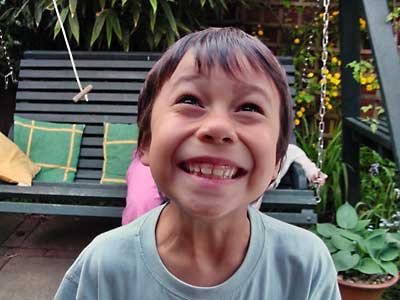 The evening wore on. I kept drinking and drinking. And eating and eating. (There was a huge spread of curries, an incredible diversity of desserts from which I felt it my duty to try each and every one, and some tasty cheeses as well). After I went to bed, this all caught up with me. Splitting headache and over-full vomity churning feeling non-stop from 2am. By 5am I felt I had to act or die. I stuck my fingers down my throat to relieve the pressure on my stomach, then necked some soluble asprin. It helped a little, and I eventually slept. Before waking up and setting off back for Sheffield (only three trains this time) by 10am.