Had a great weekend, went out rather more than my weekend average. Saturday night was Alex’s (Mr Starikov’s) birthday, so most of the members of Next Best Thing, plus assorted friends of Alex’s, met up in the Devonshire Cat. I’d passed the pub before, thought it looked interesting if a little Wetherspoonsish. Little did I know what surprises waited inside for me. It seems that they serve every half-decent beer in the world. They have a kind of glass-walled coldroom or somesuch next to the bar, which is just shelf after shelf of mainly Belgian bottled beers, plus they have an incredible number of beers on tap. I started off with a couple of glasses of Pauwel Kwak, bizzarely beautiful stuff which, given its 8% strength and silly tall hourglass-glasses, it would have been unwise to carry on drinking any longer – those glasses were just asking to be knocked over). Then I had some Estonian beer, 9%, plus lapped up the dregs of some gorgeous 14% stuff which Will had drunk enough of.

Having had our fill at the Cat, we moved on to the Cavendish, a loud characterless student-packed warehouse-type pub. I think I was virtually drunk enough not to notice by then anyway.

A quick pint later, and the bouncer cleanup-operation swept us back out onto the street. Diverted via the chippy on Division Street on our way to the Leadmill. I’d last been there to see Ooberman with Gill three or four years ago, but last time I’d been there for a club night must’ve been about ten years ago, in fact I think it was the night we walked back up to Crosspool and talked about whether we should have a child, before deciding to have “chips instead” (ever since Gill got pregnant, Rowan’s unofficial nickname has been “chips”).

So, anyway, The Leadmill, kinda fun, I was rather too drunk to know exactly what I was doing, but I remember making some kind of attempt at dancing, which only became anything like the real thing once a song I knew came on (Franz Ferdinand, Red Hot Chilli Peppers, Nirvana… mostly showing my age). I flumped into a cab at about 2.30am and, apparently, spent the rest of the night annoying Gill with hiccoughs and burps. 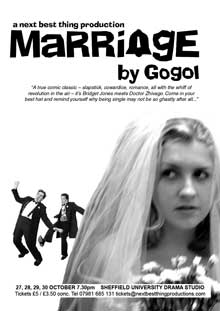 Then last night… out again. First of all Will came over for an hour or so, to help with the design of the Marriage poster and flyers (see the picture on the right – check out the handsome bloke in the middle with the Johnny Wilkinson-like leg action). Then we went down to the Coben View, where they hold a Sunday night music quiz.

I’ve been to the quiz a couple of times before, the first time we thought we might even have won it but… you know how it is with pub quizzes. It always feels like you’ve done well, until it comes time to score. Well, this time was different. It helped a lot that we had Hugh (Hugh plays bass for the Jim Muir Slideshow), whose musical knowledge exceeded mine and who thankfully owns just about everything by REM (five of the questions were snippets of REM songs played on a dodgy tape player; we had to name them; Hugh scored 4/5) and also used to have some dodgy acappella Christmas EP by the Housemartins (another musical question). For my own part, I made small but significant contributions by remembering at the last possible moment what James Newell Osterberg is better known as (it’s Iggy Pop), and also at the last minute realising that “Next Jabs Exam” is an anagram of “Basement Jaxx” (it was the Xs that did it). And I knew which of the four bands mentioned (Travis) is playing The Leadmill on 11th October, mainly because I’d been at the Leadmill the previous night and still had the flyer in my pocket. Oh and, if I’m being truthful, I did help a little by working out how to get Google on my mobile phone, and discovering that the 1999 #1 album “Come on Over” was by Shania Twain (I already knew it was somebody crap, MOR and female, but I just couldn’t put a name to her).

So, we scored 27. Out of 30. Which is incredible. OK, so if I hadn’t have cheated we’d have been on 26, but even so the highest I’ve ever seen another team score there was, I think, 25. So we were blinding. And we walked away with the prize, eight beer tokens. And as from next weekn, they’ll also be giving away free tickets to the Leadmill, which will make it even more worth going along.