We’ve just started rehearsals for the latest Next Best Thing Productions play – Shakespeare’s Richard III (I play Lord Buckingham, Dicky’s best mate. Or, in Will’s words “a sort of cross between Goebbels and GÃ¶ring”). I realised during our last performance (when I only had a couple of paragraphs to learn) that I’m starting to discover some useful strategies and mnemonics for that bane of all actors, line-learning. Here are a few of my methods, in the hope that they may prove useful to someone somewhere.

To start with, don’t worry about the daunting task ahead of you. The first 2, 3, 4, 5 or even 6 times you read the script, you should do just that. Read through it, and try not to be put off by the fact that one day soon, you’ll have to know all of this by heart.

After a couple of reads, you should start to get phrases and sentences into your short-term memory. Read through a line, and then try to recite it back in your head without looking at the page. If you can’t manage a whole line, do it with a few words, then the next few words, then try to string together the whole sentence. But don’t get too caught up in any particular part: if you’ve gone over the same sentence ten times and the words are still eluding you, move on to the next sentence or take a break.

As you start to become more familiar with the text, try looking at it from different perspectives, and from both semantic and syntactic points of view. This is where the really effective, deep learning comes from. Don’t just think of it as a sentence in a play. Examine each word. Think of its meaning. Think of another word that could serve in its place, and/or of another thing which could be meant by the same (or similar sounding) word (I often find that doing this reveals to me a lot about the playwrite’s intentions, and why they chose one specific word over another). Then ignore the word’s meaning(s) and look at the structure of the sentence. One very good way of doing this is to just look at the first letter of each word. Say the letters, either (or both) by name (Ay, Bee, See) or phonetically (with “nursery style” a, b, c sounds). Try pronouncing the imaginary word formed by the first letters of each word in the sentence. This mnemonic is incredibly helpful towards the end of script-learning, when you have the bones of a sentence in your head but keep substituting incorrect words.

Basically, think of as many different approaches to the text as you can. Play games, have fun with it. Reverse the words in the sentence if you want to, or think of words which rhyme with them. Every different approach you use strengthens the memory of the lines in your head. On top of this, it’s a lot more fun than just reading and re-reading the same old words over and over and over again.

Context helps too: I tend to read my lines while walking the dog, for several reasons. Firstly, it removes most external distractions (apart from the obvious ones such as crossing the road safely and avoiding walking into trees). Secondly the time I spend walking the dog (about half-an-hour) seems, to me, to be about the right length of time to spend line-learning: much longer than this in one chunk and my mind starts to drift. And thirdly… well, it kills two birds with one stone 🙂 Oh yeah, I think something about walking at the same time as reading is also better for mental recall than just staying sedate in a chair or bed.

When I started on the Shakespear, I had expected it to be harder work than previous plays, because of the archaic language. Actually, I find the opposite is true. The frequent use of poetic devices: rhyme, alliteration and, in particular, iambic pentameter, mean that many of the mnemonics I use for line-learning are already built into the core text.

One other thing I have learnt through studying drama: a good text just keeps on revealing new things to you, no matter how familiar you become with it. When I played the title role in MoliÃ¨re’s The Miser (l’Avare) many of my realisations about the character and the plot came in the week running up to the performance of the play, when I already had my lines well under my belt. This is a wonderful thing to experience, but it also makes me a little sad: often when I read a novel, I find myself wanting to read it a second time as I know that many subtleties eluded me the first time around. Very rarely do I actually find time for a second reading, but my experience with plays has made me feel that sometimes, if I were able to read the book so many times that every word became imprinted on my memory, only then would I fully appreciate the author’s craft.

Apparently you can find the number of shutter actuations on a Canon EOS 20D by opening a RAW file in a hex editor and reading off the numbers at positions 95D and 95E. I just tried it with the last photo I took last night (well, actually about 7am… it was a long night). It reads “C2 1D”. I make that 49,693 in decimal. Ouch! I knew I had taken a lot of photos, but I thought it was about 10,000 less than that.

Canon don’t publicise the expected shutter life of the 20D, but for the 30D it is 100,000 and Canon say that is “more durable than the 20D”. My camera’s first birthday is today (happy birthday dear EOS!) – one year in and it’s more than half-way through its expected life. This could turn out to be quite an expensive (though very useful) disposable camera. Of course, the shutters are replaceable, but I believe it costs about £200 a pop, and for that I’m almost better off buying a new camera when the inevitable happens. I’d planned on spending a couple more years with this one before moving up to a better model, but it may not last me that long.

There are many ways of rating “things”. Michelin will give your restaurant zero to (if you’re very lucky) three stars. All sorts of things are scored on percentage scales. On hot ot not, and elsewhere in life, you’re judged on how well you match up to being a “perfect ten”. But probably the majority of rating systems operate on a scale of from one to five stars (or… insert non-starry symbol of choice here. Or even the numbers one to five). There are very good reasons for this. A major one, I guess, is the nature of the human brain: short-term memory generally has seven plus or minus two slots for us to store information in, so if you go much over five then you risk having more discrete levels than you can actually comprehend at the same time. Also, five fits a standard scale centred around an average value, with values for good and ungood, plus extreme values for very good and very ungood. So, five is cool.

But after a few months of using iTunes and rating my songs according to their five star system, I started to run into problems. I started to want half-stars in between the stars. Or at the very least, a sixth star. END_OF_DOCUMENT_TOKEN_TO_BE_REPLACED

I’m being flooded with spam blog comments at the moment, despite the anti-spam plugin which I enabled aaaages ago and which has always served me very well. Ah well, these things never last forever.

For the time being I have turned on user registration, so you’ll have to register or get a typekey ID or something to be able to post here (I’ve no idea how/whether it works – try it and let me know). However, I’ll probably be switching this whole blog over to WordPress soon, as I’ve been configuring the new FAD blog using WordPress and it seems a damn sight nicer than the Movable Type which I use at the moment.

The Guardian Diary has recently run a series on poor punctuation and phrasing in public signs and elsewhere (e.g. “Drive carefully squirrels” – a sign obviously aimed at the large number of irresponsible squirrel drivers). So I was ticked to read this article on the Guardian website, which contains the following sentence (referring to David Beckham’s captaincy of the England soccer team):

The 31-year-old thanked former caretaker coach Peter Taylor for giving him the armband in November 2000 in a friendly against Italy, Sven-Goran Eriksson, his team-mates, the fans and the media.

Some friendly! I know sometimes it seems as if the whole world is against Beckham, but at least Sven and his team-mates have offered him occasional support since November 2000.

From what I have heard, it seems that yesterday the Matilda Centre was closed down due to alleged health and safety infringements. This is terrible news for Sheffield. Matilda was a real hub of activity, they put on some amazing gigs (like the Sunburned Hand of the Man gig which I photographed) and generated a real buzz around community activity in Sheffield. It will be sorely missed. 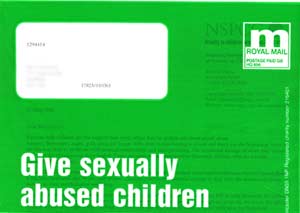 When this turned up in the post, I was rather surprised
– was it the latest Christmas catalogue from some charity wanting to offer ever more original gift ideas? However, the A4 envelope was folded in half, and the unfolded envelope told the full story. Not sure whether this was a deliberate ploy on behalf of the NSPCC’s direct mail team, whatever it was it seemed quite bizarre. 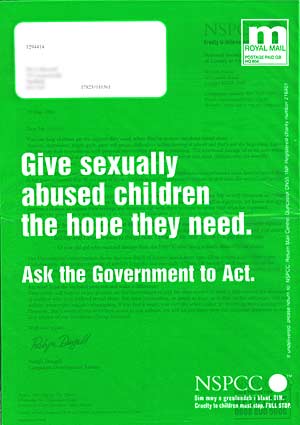 I can surf to google.co.uk no problem, but if I try to reach .com then it redirects me to google.de. And now I’ve noticed that when I’m served Google ads, there’s usually a smattering of German ones among them.

I can see various ways in which this might have happened. Most likely theory is that the Germans who stayed here recently flicked some switch and it stayed switched. But I’ve also done a fair bit of Googling in German, and other stuff in German (including installing a browser plugin which translates words to German when I hover the mouse over them). Somewhere along the line, Google must have picked up the idea that I’m German.

Well, if nothing else, this demonstrates that the day when Google knows everything there is to know about us is still some way off.

Meanwhile, this morning I’ve been reading in the Guardian about
the German sense of humour (yes, there is one).

Update: After visiting Worldpay and getting a page in German, I finally realised what the problem is. I recently started using an (excellent) proxy service set up by The Future’s Perfect. The proxy server filters out all known viruses, trojans and other nasties before they even reach my (woefully inadequate – yes, I still love IE) web browser. However, because the proxy server is based in Germany, and some websites serve different content depending on your IP address, they sniff the German server’s IP address and serve me their content in German.