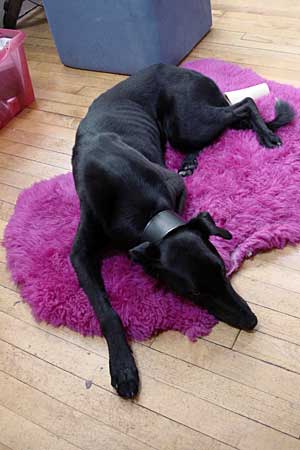 We have a new dog! Now we just need to buy a car to fit him.

Why not scare your children out of their tiny minds this Christmas with a Cthulhu Santa?

“Man, some rock-n-roll has got so lame nowadays. I read what those bunch of hairy no-marks Black rebel Motorbikle Club said in a recent interview: ‘We’d love to get a motorbike and ride across the USA but we’re afraid of getting shot.’ To them I say, then get shot, you wankers. For us. Even in death, you’d be more alive than you are right now.”

I’m sorry if anybody has tried and failed to post any comments the last couple of days – I went over my disk quota (that I set myself, stupid dolt that I am – who’d have thought I’d ever need more than 333mb???)

It should be OK now.

What am I thinking of – no fucker ever posts comments here. Please begin now.

Next Wednesday, 1st October, is Cultivate an Aura of Mystery Day. That’s all I’m saying on the matter.
(thanks Auriea)

Here’s an interesting article on the analytical language created by John Wilkins in the Seventeenth Century. And here’s an excerpt:

He divided the universe in forty categories or classes, these being further subdivided into differences, which was then subdivided into species. He assigned to each class a monosyllable of two letters; to each difference, a consonant; to each species, a vowel. For example: de, which means an element; deb, the first of the elements, fire; deba, a part of the element fire, a flame. In a similar language invented by Letellier (1850) a means animal; ab, mammal; abo, carnivore; aboj, feline; aboje, cat; abi, herbivore; abiv, horse; etc. In the language of Bonifacio Sotos Ochando (1845) imaba means building; imaca, harem; imafe, hospital; imafo, pesthouse; imari, house; imaru, country house; imedo, coloumn; imede, pillar; imego, floor; imela, ceiling; imogo, window; bire, bookbinder; birer, bookbinding.

I wonder what life would be like with such a language. On the one hand, the encyclopaedic nature of the very words we speak would make learning a more rational task (and I’ve no doubt it would make certain forms of linguistic computer programming easier too), but on the other I can’t help thinking that so many words that were so similar could only confuse matters. Also, knowing how hard it is to come up with decent categorisation schemes, I’ve no doubt that this one would seem out-of-date as soon as it had been set in stone. The article goes on to state that in a certain Chinese encyclopaedia:

In light of which, you have to wonder how much an encyclopaedic language would blinker us into one way of seeing the universe?

An interesting metaphor that seems to be increasing in useage: Technical Debt – doing technical things the quick and dirty way incurs technical debt which, like financial debt, requires interest payments in the future.

I love etymology, as you may have noticed from some of my recent Merriam Webster entries. I also love cranky swear-words and terms of abuse, words like pillock, git and berk. So this page from H2G2 giving the origins of various British swear words is an absolute gift! I don’t need any more Christmas presents now.